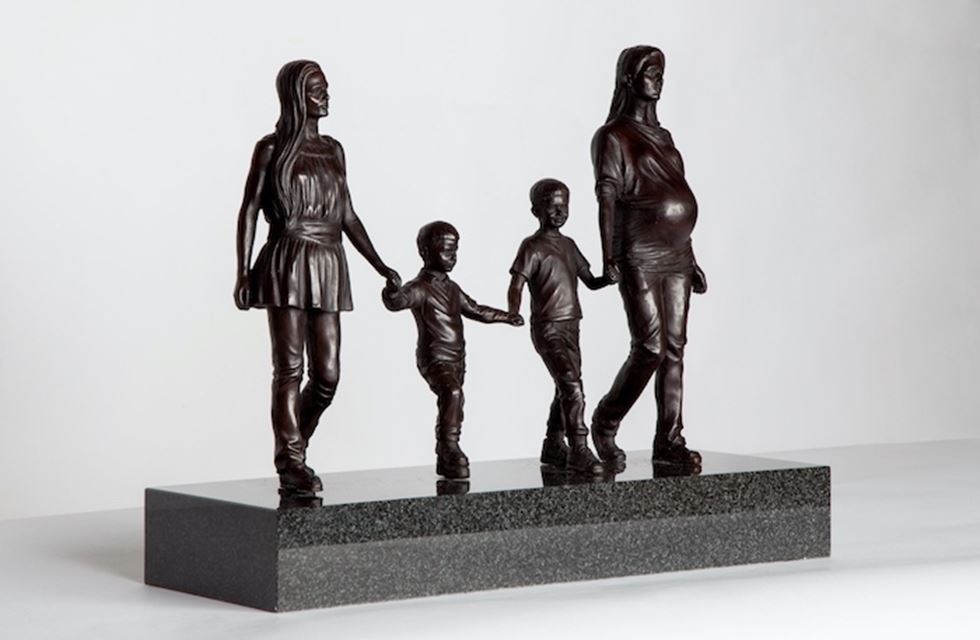 Sigrid Kirk is co-founder of the Association of Women in the Arts (AWITA), an organisation that brings together inspirational women in the arts world to encourage networking, mentoring and collaboration; she is also co-founder of Arts Co, a cultural production company that creates content, advises on strategy, and produces events across fashion, art, design, film and theatre. Kirk is a committed supporter of arts institutions, including as a trustee of the Drawing Room, a member of the Advisory Board of Glasgow International, and as a member of the London Advisory Board of Ikon Gallery, Birmingham. This summer, at 236 Westbourne Grove, she curated ‘In this space we breathe’, an exhibition of the work of Khadija Saye, the young British Gambian photographer who died aged 24 in the Grenfell Tower Fire.

I first became interested in contemporary art when I was growing up in New Plymouth, New Zealand. It’s a small town with an extraordinary contemporary art gallery, the Govett-Brewster Art Gallery – which you could compare to some of the Kunsthaus institutions in Germany or elsewhere in northern Europe, where there are small towns with fantastic collections. The Govett-Brewster holds the estate of Len Lye, the New Zealand-born artist who lived in Britain for many years, working for the British General Post Office, making films. That was the start of his artistic practice – he couldn’t afford materials, so he scratched into offcuts of the films. He also made vast kinetic sculptures. As a child I was taken to the gallery almost every week, on a Sunday; once the sculptures had been turned on we’d sit on the black-carpeted stairs, and look at these huge kinetic objects – big bands of steel that flipped and twisted and made noises. When I think about art, for me that’s where it all started. 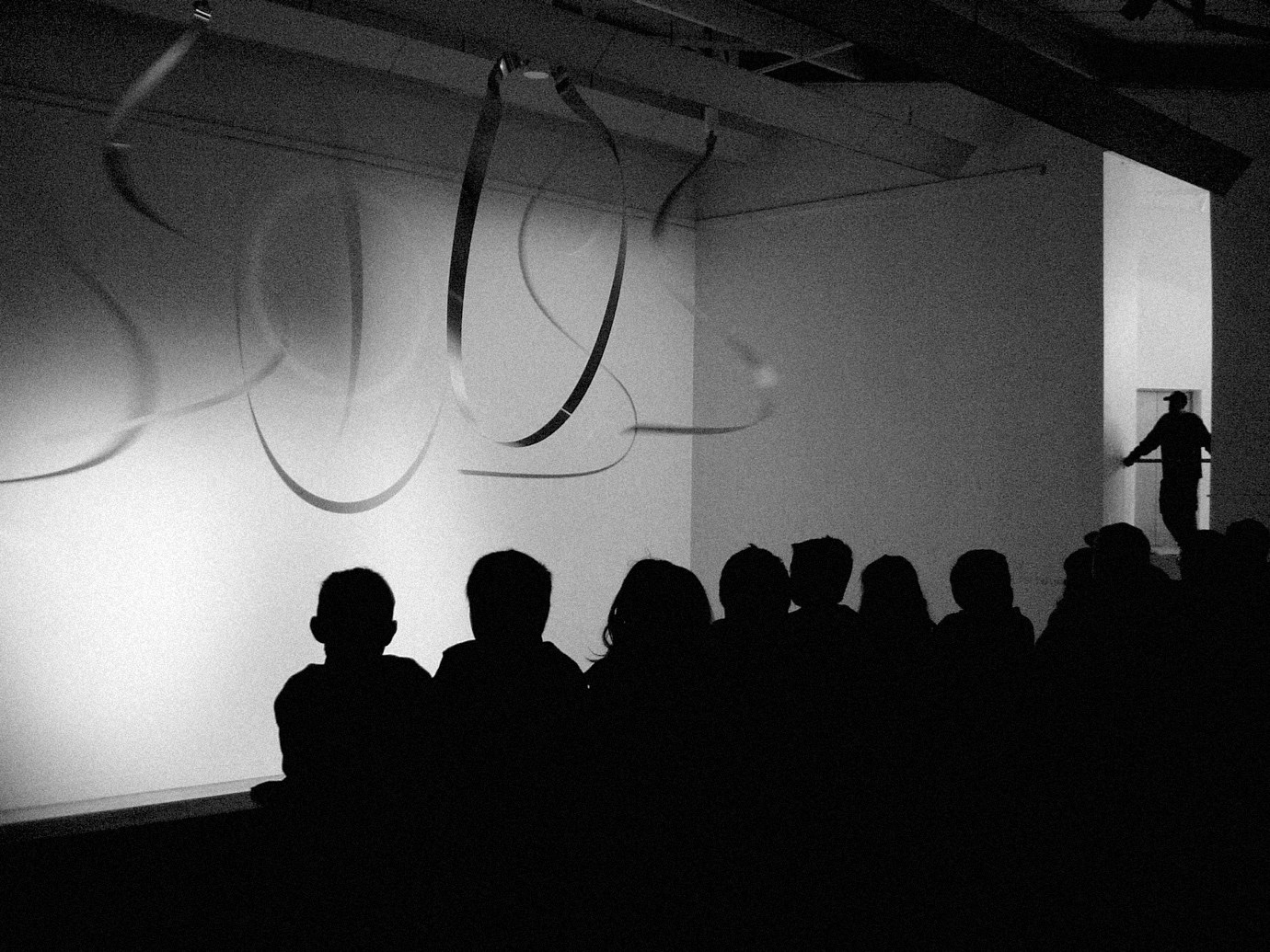 I’m struck but how far the history of collecting intertwines with those of curating and museums. One collector who has long inspired me is Katherine Dreier – an artist, patron, social reformer and lecturer who was very close to Duchamp and set up the Société Anonyme in the 1930s. It had a collection of some 800 works, by 175 artists. Dreier formed her collection to be seen, and social reform was always in the mix. Among contemporary collectors, I think that Francesca von Habsburg has taken an interesting approach. She comes from a family with a long history of collecting and connoisseurship, and she is absolutely a social activist; she works with artists such as Ernesto Neto and Tomás Saraceno, and her concerns for the environment coincide with theirs. The projects she’s involved with always have a social purpose. 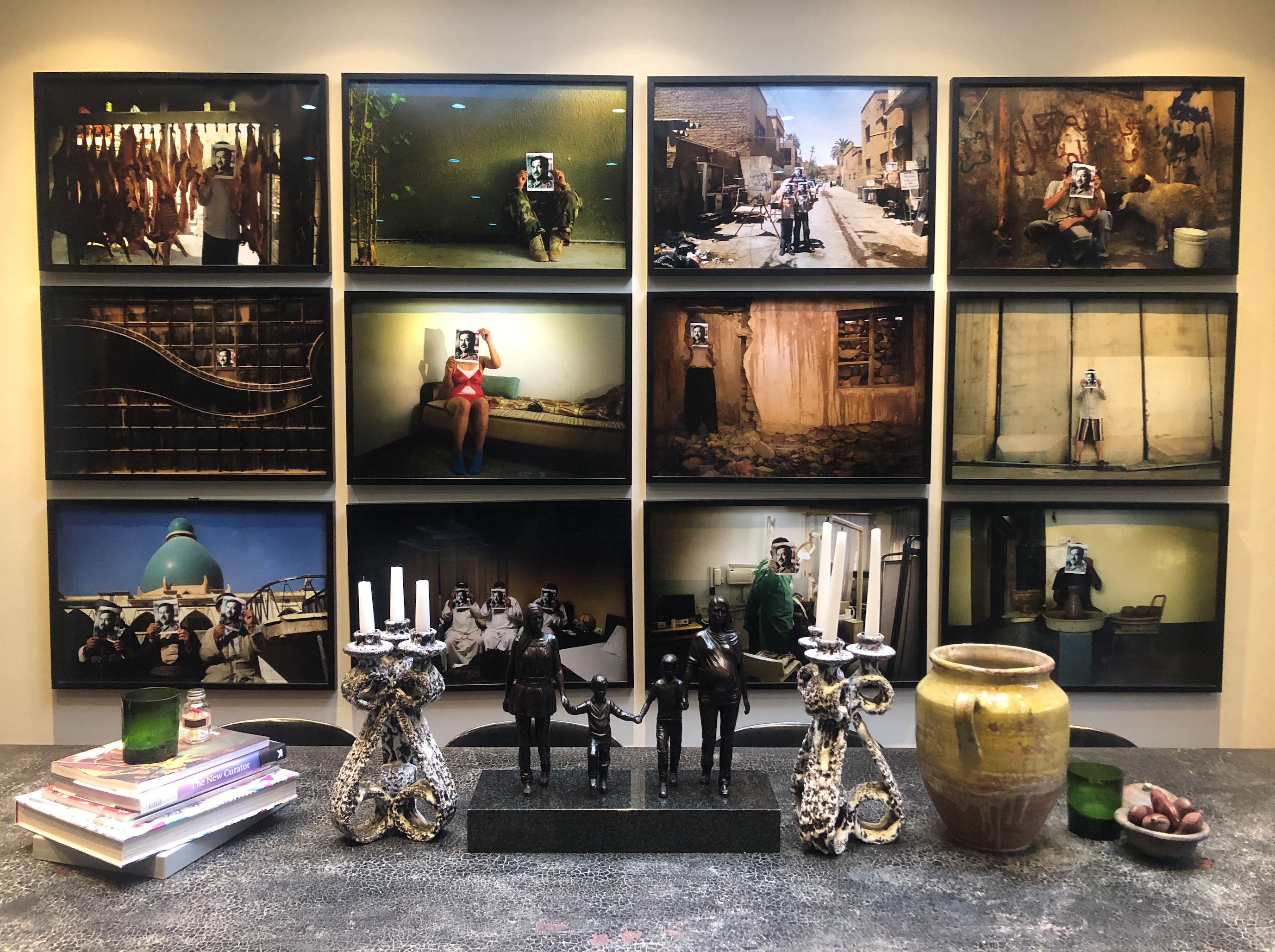 Saddam is Here by Jamal Penjweny hangs in the kitchen, where Gillian Wearing’s A Real Birmingham Family sits on the table

The work I live with is quite eclectic. I’ve been buying work ad hoc for many years; a lot of it wasn’t that expensive, because we didn’t have the money when we started. In the kitchen, for example, we have a piece called Saddam is Here by Jamal Penjweny, an Iraqi artist whose work featured in ‘Welcome to Iraq’, an exhibition that Jonathan Watkins curated at the Venice Biennale in 2013. The work consists of 12 photographs that show people in Iraq – a prostitute, a doctor, a dentist, people praying, a street vendor – all of who are holding up in front of their faces an image of Saddam Hussein. I guess the artist’s idea was that, in Iraq, Saddam was revered – as a hero, as a mythical figure – as much as he was feared. Even though he’s no longer alive, he’s always there. It’s a beautiful piece, but also very difficult, and it felt important to hang it in our kitchen where we sit and eat every day. Art should always ask questions.

Another piece that’s very important to me is a maquette for A Real Birmingham Family by Gillian Wearing, which stands on the kitchen table. I am worried about the fragmentation of society, and about social inequality, but in Britain I do feel quite positive in many ways. For this work, Gillian sent out an open invitation to the people of Birmingham to apply to be cast as a life-sized sculpture that would represent a modern family in the city. She had nearly 400 applications – people from all walks of life, from recent arrivals to people who felt very rooted in Birmingham. The family that was selected was two sisters, both single mothers with mixed-race backgrounds, who lived together with their children. It’s a very strong image of what the modern family can be in Britain. We have recently bought a self portrait by Wearing, painted during the quiet and loneliness of lockdown, where she has literally and figuratively unpeeled the mask –  she has long been fascinated with these, if you recall her show at the National Portrait gallery with Claude Cahun. This work exposes the fragility and desperation of isolation. During lockdown I looked daily at the photograph we have in our kitchen, My Grip on Life is rather Loose!, from the series Signs that Say What You Want Them To Say and Not Signs that Say What Someone Else Wants You To Say from 1992–93. Where once it seemed humorous, too often this year it hasn’t. 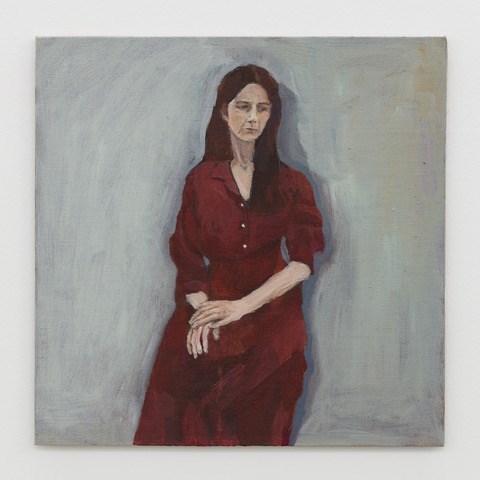 There are no set rules about what we collect, other than that everything is contemporary. I’d say that my approach has changed in recent years: I now think twice about buying works by too many white men and I positively look to support female artists. I’m quite interested in performance art, and the extent to which it can be collected, but on the whole I like to know about objects, to have some relation with the mark-making or the content and how it feels. We do have a lot of drawings (I’ve been a trustee of the Drawing Room for 12 years). Buying drawings is a wonderful way of being able to own work by artists whose work you might not otherwise be able to acquire. We have two beautiful Cecily Browns, for instance – a drawing and a watercolour. Her drawings are much more figurative than the paintings, often with specific mythological subjects. They’re quite seductive, even erotic. 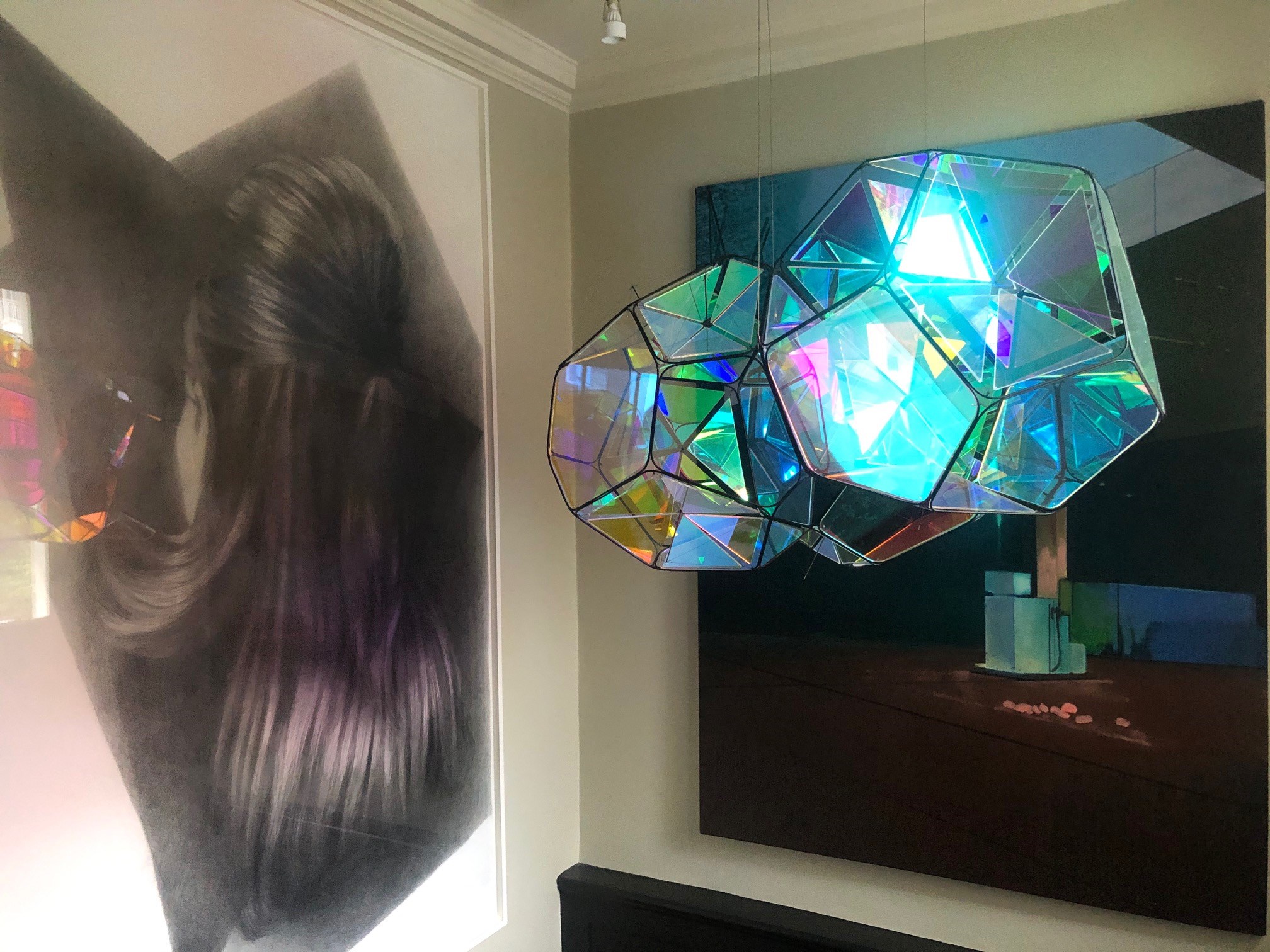 I don’t buy art to store it but to live with it. That’s led to site-specific works for the house: above the kitchen table, for example, there’s a work by James Ireland, an artist who’s very interested in Romantic painters such as Caspar David Friedrich, but uses man-made materials, found objects, and strips them down to their essentials. This piece is made from stainless steel, coloured glass and huge crystals; when the sun comes through the skylight in the morning, it really changes the room. In the stairwell is a large Tomás Saraceno that’s just as joyous to live with: when you come downstairs at 6am you feel like you’re in a hymn, with these colours shooting all over the place. And then there’s a huge piece by Nacho Carbonell, which sits like a hulking creature in the wine cellar; we needed some steps in there, so the artist created this work, with bulbous lamps that look like wine bladders and steps made of compressed cork. It’s functional but it’s also very sculptural.

When I first arrived in London, I worked for an art shipping company – no one else would hire me, with my New Zealand accent that could break windows – and we worked frequently with Gilbert & George. Some of their mantras have stuck with me: ‘To be with art is all we ask’. How can one fully be with art? You have to keep questioning yourself, to keep asking yourself ‘Why does this art move me?’. You have to keep looking and looking. To be fully with art is not just about the object: it’s about community, about convening people, about supporting arts organisations. It’s about being part of bigger conversations.
share: