Object of the Month: The Return from Market 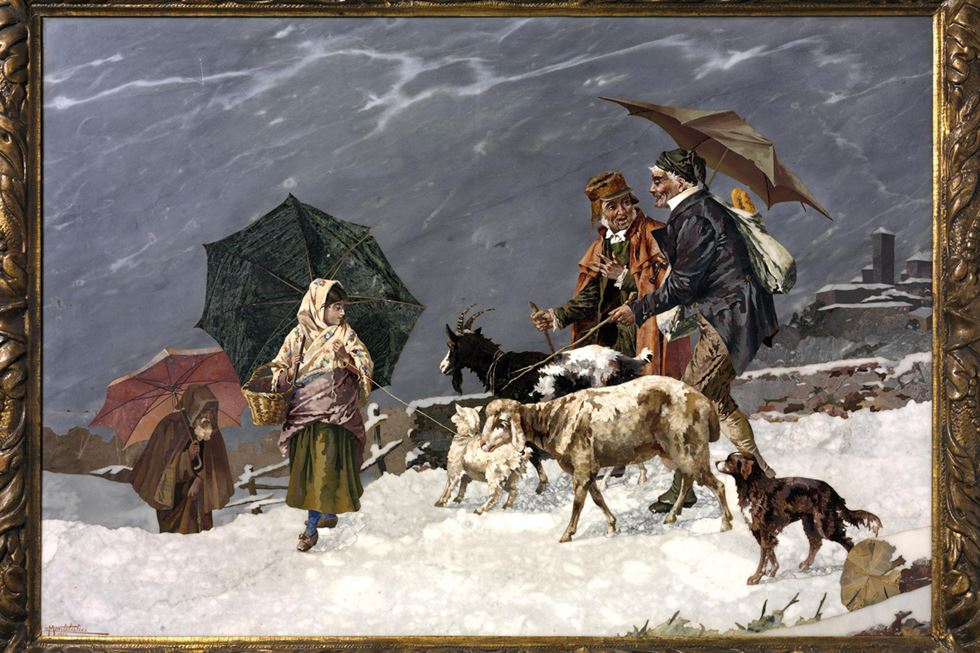 I am reminded of a snowy scene which used to adorn the walls of that Florida home and now forms part of the Rosalinde and Arthur Gilbert Collection at the Victoria and Albert Museum. This Tuscan landscape contrasts with the lavish dining room, modelled on a 17th century room in the Chigi Palace, Rome, then the residence of Benito Mussolini. Its walls hung with late 18th century Flemish paintings from Castle Paw, near Amsterdam.

Displayed from 2009-2014 in the V&A’s Gilbert Galleries but currently in storage, The Return from Market was made in pietre dure (hardstone) by the Montelatici workshop (they operated as the Società Civile Arte del Mosaico) in Florence in 1928. It is based on a painting by Luigi Crosio (1835-1915) who studied at the Academy of Fine Arts in Turin, Italy.

The picture was commissioned for the Palm Beach home of Marjorie Merriweather Post (1887-1973), the ‘Grape Nuts’ heiress; she owned the Postum Cereal Company and became the wealthiest woman in the US. Mar-A-Lago was designed for Marjorie ‘the Queen Bee of Palm Beach’ and her then-husband Edward Francis Hutton by the Viennese architect Joseph Urban. It cost 1.5 million dollars more than originally planned; its lavish interiors furnished with the richest materials. It is no surprise that the Montelatici workshop also supplied a vast dining table to Urban’s designs which was over 16 foot long with six extension leaves that added 12 foot to the total length.

Inlaid with lapis lazuli, red jasper, white oriental alabaster, yellow chalcedony, shell and green gabbro, it incorporates the Hutton armorial crest and the signature medallion for the workshop and took 17 artists a full year to complete.  Mrs Post regarded this as ‘probably the most important thing in the entire house’ and it was willed on her death to Hillwood, her beautiful home in Washington DC, where her French and Russian collections are preserved for public benefit. Mar-A-Lago was bequeathed to the US Government as a retreat for Presidents and visiting foreign dignatories, but was returned to the Post Foundation from whom Trump purchased the estate in 1985. In 1995 Trump turned Mar-A-Lago into a spa hotel and some of the original contents including the pietre dure picture were sold at Christie’s New York, 1995.

The Return from Market uses hardstones local to Florence, white and bardiglio marble from Carrara, onyx, gabbro (an igneous rock named after a village in Tuscany, near Livorno) and alberese (from Pratolino) to illustrate the wintry journey of a monk, a young woman with a lamb and two elderly farmers with a goat, a sheep and a dog returning from market in the nearby hill town; one with the daily bread supply tucked under an umbrella which offers little protection from the gale. The bardiglio grey- veined marble brilliantly captures the storm-laden skies, whilst white marble recreates the heavy weight of freshly fallen snow familiar to citizens of New York and Boston this February.

The taste for decoration in hardstone evolved at the Florentine Medici Court in the sixteenth century. Always a luxury product, by the early 20th century, workshops used less expensive Tuscan stones for rural subjects; here the harsh reality of peasant life is set against the beauty of the natural landscape. Mrs Post was willing to be reminded of the challenges of rural existence despite the glamorous surroundings of her Palm Beach setting.
share: