Object of the Month: Three Holy Women at the Tomb 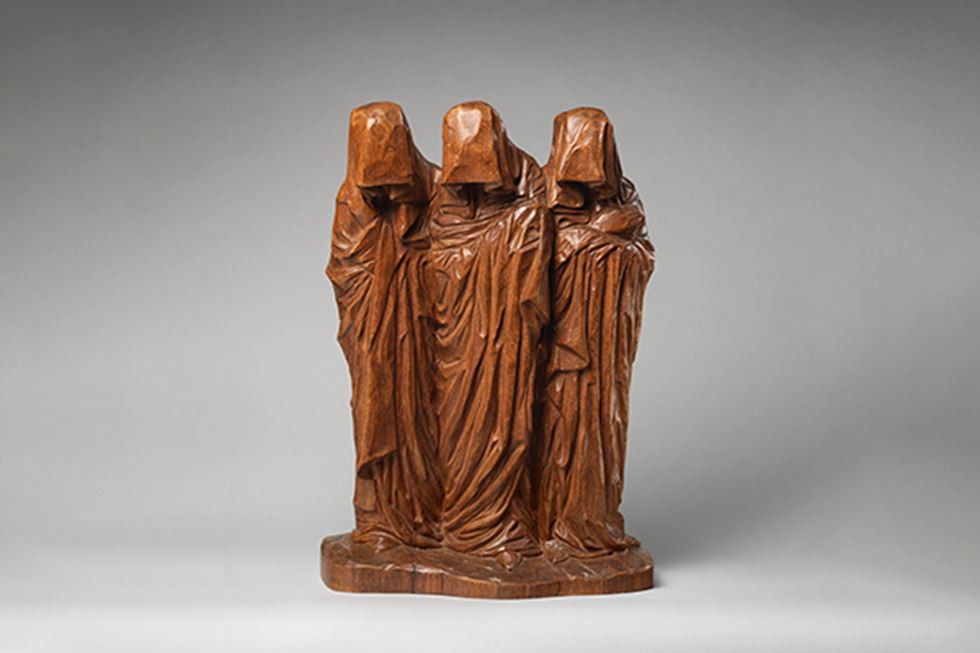 My name is Elyse Nelson, and I am an assistant curator in the department of European Sculpture and Decorative Arts at The Metropolitan Museum of Art in New York, where I oversee the collection of eighteenth- and nineteenth-century European sculpture.

When one thinks of figurative sculpture carved from wood, the first works that often come to mind are the medieval limewood sculptures found in Gothic churches, or the saintly figures in splendid polychrome from the Spanish Renaissance. Rarely do we associate the medium with sculpture of the late nineteenth century, a period that saw the production of portrait busts and lyrical figures in white or colored marble and sculptural editions in cast bronze. Neo-Renaissance interiors of the period featured elaborately carved wood furnishings, but standalone wooden statues were much harder to come by.

The unusual choice of medium is one of many reasons I find George Minne’s Three Holy Women at the Tomb (modeled 1896, carved before 1918) at The Met so compelling. Recently offered to the museum by the collectors Gregory White Smith and Steven Naifeh as a gift in honor of The Met’s 150th anniversary, the sculpture joins a small but significant group of newly acquired paintings and sculptures by Secessionist artists that crucially represent the pan-European character of avant-garde modernism in the galleries.

The composition for this small wood-carved sculpture was modeled in 1896 in Brussels during the most intense creative period of Minne’s career when he was developing emotive figures in attitudes of sorrow and contemplation. The sculpture is fashioned from a humble, grainy oak that harkens back to the traditions of medieval woodcarving and woodblock printmaking, which influenced Minne’s own book illustrations from the early 1890s.

His title associates the women with the Marys who grieved at Christ’s sepulcher. The three women stand in a row with their heads bowed in mourning. The heavy drapery wound round their arms cascades to the ground subsuming the figures within its folds. Their robes recall those of the small, cloaked mourning figures that process along the sides of medieval tombs. Yet The Three Holy Women is neither religious nor devotional in intent. Minne’s lifelong engagement with the religious spirituality of the Middle Ages had more to do with his desire to make visible our deepest emotions and vulnerabilities than an attachment to Christian doctrine. Fused together in stillness, Minne’s silent, faceless women are suffused with a profound melancholy that speaks to the spiritual yearning felt at the turn of the century. Just as the figures convey a depth of emotion through their simple stances and gestures, so too does the medium of raw wood, lightly varnished to a golden hue, express a primeval aura of solemnity.

The subtleties of medium are always best appreciated in person, so I invite you to visit the second floor nineteenth-century galleries at The Met, where this sculpture and others by Minne and Max Klinger are presented in dialogue with Symbolist and avant-garde paintings.
share: