Object of the Month: Still Life with a Cup of Water and a Rose 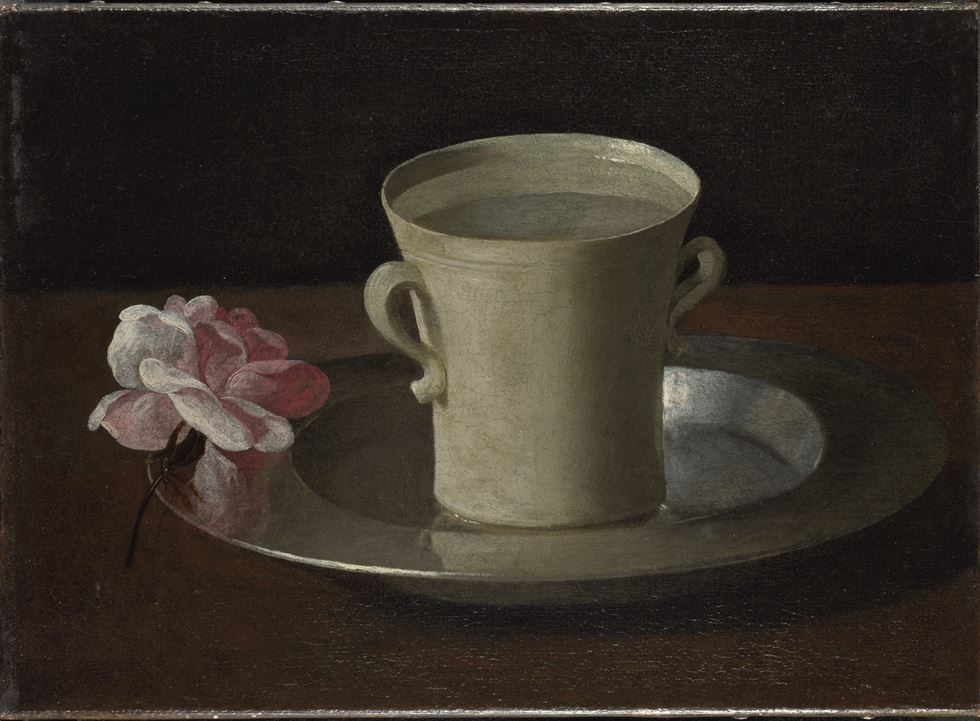 At the National Gallery, where I am Director, there is an ebb and flow of which works are my favourites. There is an embarrassment of riches of course, but Zurbarán’s Still Life with a Cup of Water and a Rose painted in Seville in the 1630s, often comes to my mind. It is unassuming in size and subject matter but I find it achingly beautiful. It carries with it an aura of profound seriousness and it invites slow looking and reflection. For me, it speaks as a metaphor of the kind of simplicity that one can only aspire to achieving in one’s own life.

Placed on a table at hand height is a white ceramic cup filled almost to the brim with water. It sits on a silver plate upon whose broad rim rests a pink rose, the stem trailing off at an angle. Set starkly against a dark background, it seems natural to want to invest this motif with religious meaning: the virginal purity of the water, and the association of the flower with the rosa-mistica appellation of the Virgin Mary suggest we should read it allegorically.

Zurbarán mostly painted ascetic monks in their white habits or processing virgin-martyrs but every now and then he turned to still life and created images of a searing, lyrical beauty. The objects here are life size and their visual impact is enhanced by their closeness to the picture plane. The fall of light gives rise to an array of reflections and highlights on the objects. Particularly impressive is the combination of shadow, highlight and surface glimmer at the top of the cup of water. The petals adjacent to the plate mingle with their own reflections on the lustrous metal surface.

The painting once belonged to my predecessor as Director of the National Gallery, Kenneth Clark, who acquired it in the 1930s. I first saw it in 1994 at Saltwood in Kent when it was owned by his son, the politician and diarist, Alan Clark. Three years later it was acquired by the Gallery where it has come to be  much admired, especially by contemporary painters. I try and see it as often as I can.

Picture credit: Francisco de Zurbarán. A Cup of Water and a Rose. About 1630. © The National Gallery, London