Object of the Month: A Dutch gold snuffbox with Rebecca at the well 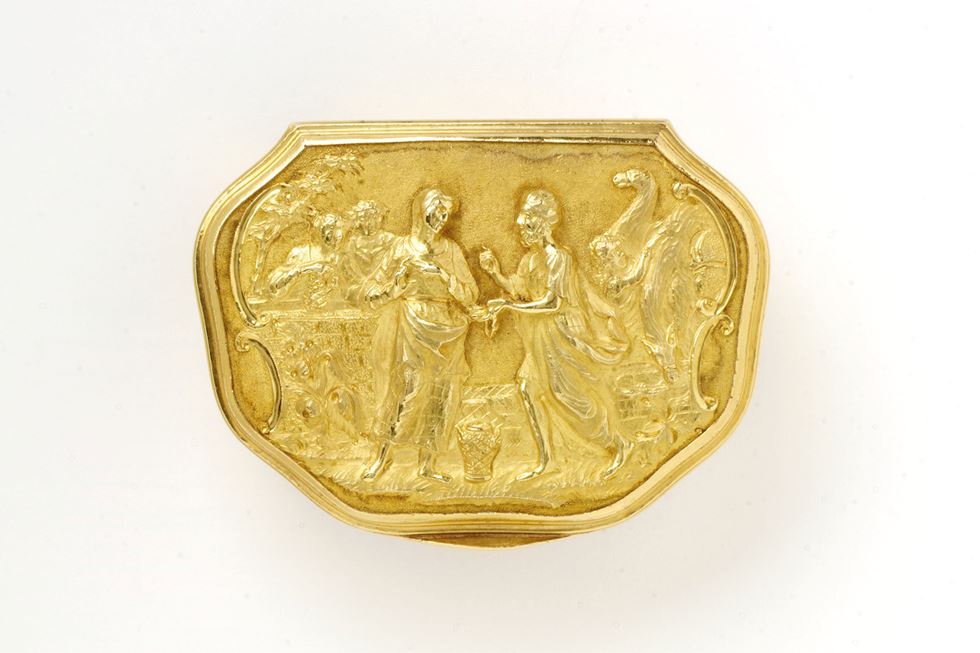 My name is Alice Minter and I am the Curator of the Rosalinde and Arthur Gilbert Collection, on loan to the Victoria & Albert Museum since 2008.

The Gilbert Collection comprises one of the largest collection of snuffboxes built by a private collector, with illustrious 18th and 19th centuries examples from the most eminent centres of production in Europe, as well as Russia. As we recently updated their permanent display at the museum, I was able to handle and study one of my favourite examples.

This small snuffbox – only 7.7cm wide and 1.6cm high– embodies the art of the goldsmith at its utmost. Made exclusively of gold, the panel forming the lid is superbly chased with a scene from the Old Testament: Rebecca at the Well. Chasing is working the metal, here a gold sheet as fine as paper, from the front with the use of hammers, in this case undoubtedly as small as pencils. The goldsmith has produced a wonderfully lifeful design as the wind blows in the servant’s clothes while running and presenting to Rebecca his master’s marriage proposal; and Rebecca’s perplex expression is subtly rendered. Each detail of clothes, leaf, stone, wicker basket has been worked and patterned to be as realistic as possible, and the skin of faces, arms and legs given a highly polished and shiny surface. The volumes are further contrasted thanks to a sand-like matted background. It is a sheer drawing brought to its three-dimensional life.

Parisian goldsmiths were leading the production of snuffboxes across Europe, but this box was made in Amsterdam. Its maker is, however, French, Lewis or Louis Métayer, from a large family of goldsmiths in Rouen (Normandy). In fact, there are two makers: while the box itself bears the maker’s mark of Lewis, the chasing is undoubtedly by his brother and partner Philippe Métayer. They were both celebrated goldsmiths in Amsterdam – their most iconic piece, signed and dated, being a gold wedding cup now in the Rijskmuseum (Object number BK-1981-51).

Arthur Gilbert himself said that gold boxes were ‘sensual’ and that in fact, by handling them, he obtained more joy than with his collection of silver or micromosaics. While handling remains a rare privilege, this box is now on public display, waiting eagerly to be admired by many visitors when our doors can reopen.