Object of the month: Fired Up: Large dish with painted fish, Iran c. 1300 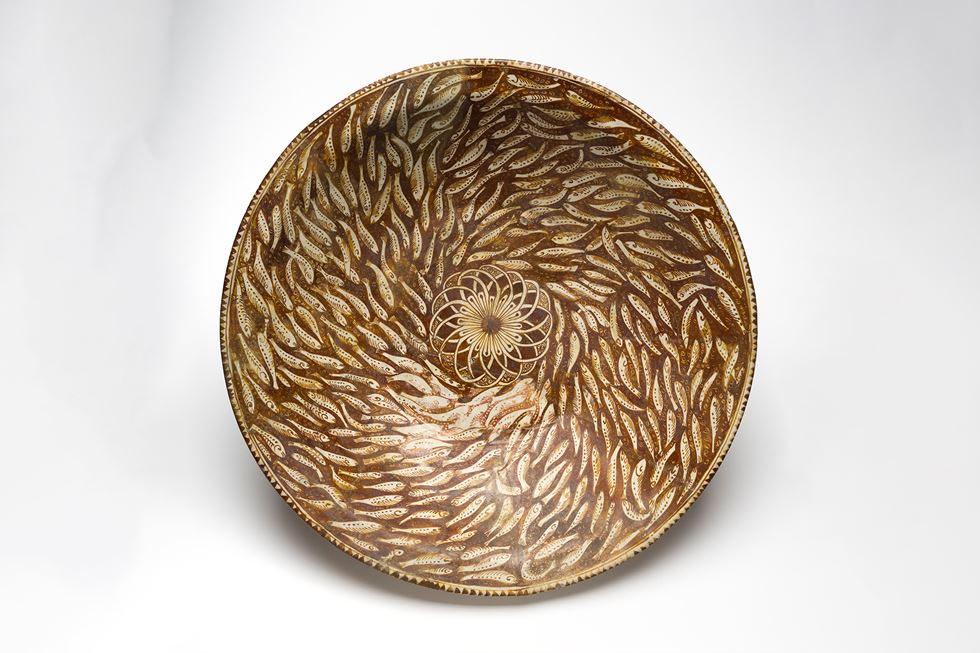 Selected by Luke Syson, Director of the Fitzwilliam Museum.

Fired Up. As we emerge from this time of emergency, a global pandemic and the almost miraculously rapid production of vaccines, I’ve been pondering what other, more unexpected, more benign factors in our lives spurs scientific creativity. How, for example, might our beliefs, about beauty and modesty and the divine, drive technological innovation? That’s one of the things that excites me most about ceramics – the turning of generally inexpensive raw materials to objects that are remarkable by the ways they have been transformed.

And, though it’s restored in parts, there are few objects I admire more than the Fitzwilliam Museum’s large dish, quick with painted fish, like the shoals that slip and flicker about your feet at the edge of the sea. It was made in Iran around 1300. The pinkish fritware form, a gentle cone, has a hardness and lightness that is almost athletic, with the strength but vulnerability of a middle distance runner. The fish whorl round a central rosette roundel, painted in reserve against a gleaming lustre background. I love their bass clef gills, the comb hatching that suggests their crunchy little skeletons, the effervescent incised bubbles between them, which so increase their glinting movement, so enhance the energy of the dish itself. All this subtly augmented and protected by the clear glaze.

Ceramic was not the also-ran medium in medieval Iraq, Persia and Syria, that it was for the most part in Christian Europe. The Hadiths prohibited the use of gold and silver vessels at table. So the effort and expense that went into works in clay makes perfect sense.  That’s exactly what is contained and represented in this dish. The brilliant artistic decisions wouldn’t have been possible without potter-chemists discovering the frits that vitrify clay at lower temperatures in the kiln, the translucent glazes that allow colour, and the absolutely marvelous lustres. Abu’l-Qasim’s 1301 recipe book describes the materials for making and decorating Kashan pots – the particular mountains, mines and quarries for quartz, sodas, ores, that then required burning and roasting, pounding and sieving until they were powdered ‘like kohl’, to be incorporated into the bodies of wares and vessels like this one, applied as underglazes, painted on, fired. The text provides a fascinating insight into all the technological know-how that a desire to make pots as beautiful as this had inspired.  The Fitzwilliam’s collection was wonderfully enriched in 2019 by a gift of 70 pieces by the Ades family: the largest part of a hoard of pots that a merchant had concealed when Gurgan, near the Caspian Sea, was invaded by the Mongols in AD 1220-21, only to be rediscovered centuries later.  No wonder the merchant prized them so highly; like the fish dish bequeathed in 1946 by Oscar Raphael, they’re the embodiments of geological and scientific discovery, of minds as modest, fluid and lively as a shoal of whitebait.