Object of the Month: A rabbit as big as life 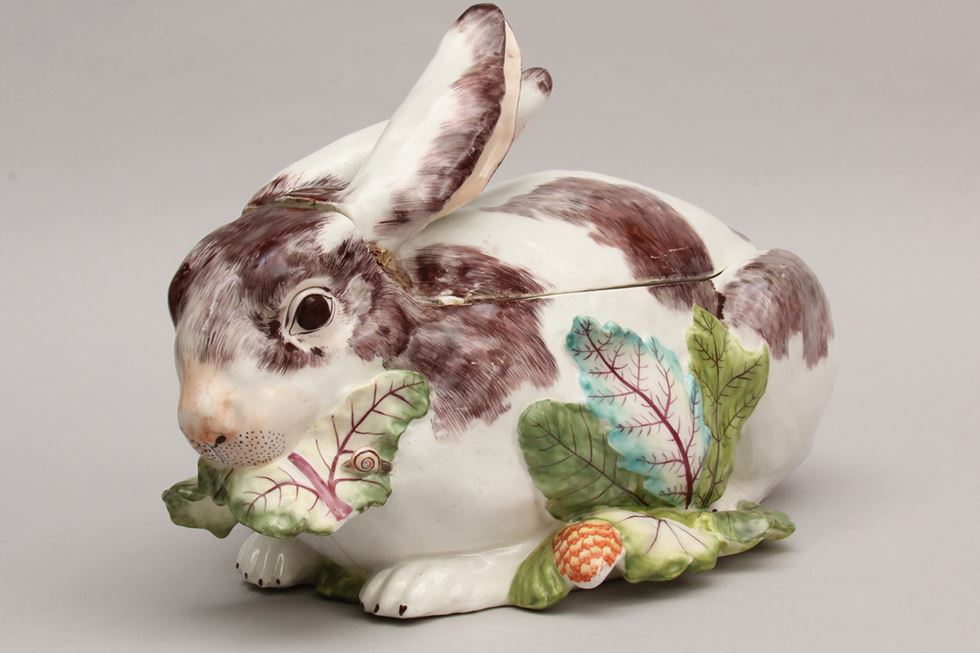 Rabbit Tureen
England, Chelsea, c. 1755–1756
Soft-paste porcelain with overglaze enamels (L: 14 in; W: 9 ½ in; H: 9 in)
Mark: Anchor and 20 in red enamel
Gardiner Museum, Toronto, Canada. G94.2.1. Purchased with a gift from Dr. Walter S. Bloom and Carol Bloom Koffler in memory of their mother, Adele S. Bloom, a collector and connoisseur of English porcelain; with a grant from the Government of Canada, Ministry of Communications under the terms of the Cultural Property Export and Import Act, and with the assistance of the Tecolote Foundation.  Provenance: Collection of Mr. and Mrs. James McGregor Stewart, Canada.


What could be more delightful than this rabbit, casually nibbling on a leaf of lettuce inhabited by a little snail?  It was made at the English porcelain manufactory of Chelsea, probably between 1755 and 1756, when rabbit tureens were advertised in Chelsea’s printed sales catalogues.  One was described evocatively as “A Fine tureen in the form of a rabbit as big as life…”

The concept of making animal- and bird-shaped ceramic tureens most likely sprang from a medieval banqueting tradition which survived to the baroque period, where cooked food was presented in its original form. One example was swan, a delicacy sometimes served in a raised pie surmounted by its feathered wings and arched neck and head, imitating the living creature.

Naturalistic tureens were produced by faience and porcelain manufactures all over Europe during the third quarter of the 18th century. They embody the rococo fascination with nature and illusion. Alongside large tureens, dishes containing realistic ceramic nuts, lettuces or radishes, apples (complete with tiny caterpillars), and even peeled eggs adorned tables to the delight and surprise of diners, while the dessert itself might be presented on fragile porcelain dishes resembling leaves.  This love for trompe l’oeuil and lighthearted whimsy even resulted in unusually flavoured ice creams molded so convincingly in naturalistic shapes that they fooled both the eye and the taste buds.

Although Chelsea used the same molds to produce all its large rabbit tureens, there are slight variations, and no two rabbits have the same decoration.  The artist found it necessary to number each lid and base to assure a match.  Of the eight surviving rabbit tureens, the numbers range from 1 to 25, so Chelsea must have made at least 26, as one example survives without a number.

This Chelsea rabbit tureen remains one of the Gardiner Museum’s most popular and beloved objects and is one of my personal favourites.
share: