Running a hand along the bannister of the monumental spiral staircase of the Musée Jacquemart-André on the Boulevard Haussmann, Paris, you cannot help but be transported. It ought to be 1876. You ought to be wearing white tie and tails or the ruched and bustled evening gown of une femme à Paris in a painting by James Tissot. You ought to be carrying a fan.

The first time I went to the Jacquemart-André, the Tuileries were white with snow. I was too early and the pavilion doors were locked. I marched around the Parc Monceau to keep warm. Inside the museum, I was the only visitor. On that hushed morning with salon after salon to myself, I had the chance to play at chatelaine. I kept expecting to come upon Nélie Jacquemart herself, turning the pages of a saleroom catalogue, drawing up a guest list for a ball, or pausing for a moment by the windows of the winter garden to watch the settling snow. 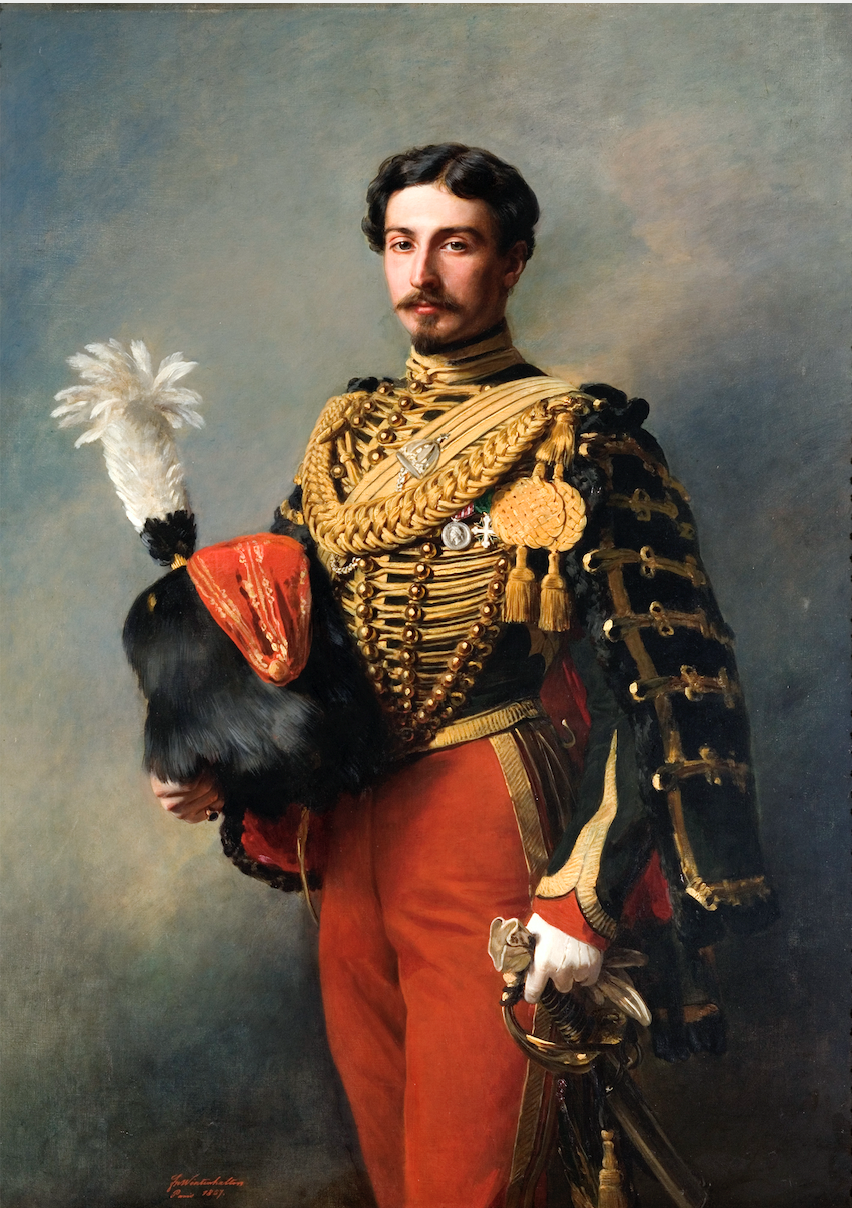 Nélie Jacquemart, born in 1841, was a painter. In her self-portrait she stands at an angle, arms crossed, looking over one shoulder, in a plain and waisted dress. No ruffles, no ribbons, nothing to drag in the paint. Édouard André, born in 1833, was the only child of Ernest André and Louisa Mathilde Cottier. Their marriage had united two banking dynasties and Édouard was a rich man. Better than that, he was a rich man with taste. At 18, Édouard entered the Saint-Cyr military academy, and at 24 was painted by Franz Xaver Winterhalter in the uniform of the Imperial Guard: Van Dyck beard, scarlet trousers, plumed helmet. Between war and pleasure, Édouard chose pleasure. In 1860, aged 27, he started collecting. He bought Sèvres porcelain and miniatures, rococo tapestries and Louis XV furniture. He bought paintings by Delacroix and by the gleaning, ploughing, hay-stacking painters of the Barbizon school. By 1869, Édouard needed somewhere to put it all. He bought a plot of land on the newly drawn-up Boulevard Haussmann and commissioned Henri Parent to build a spectacular hôtel particulier with domed pavilion wings. At the inaugural ball in 1876, guests debated which was the more magnificent: Charles Garnier’s new Opera House or Monsieur Parent’s mirrored helix stairs. A thousand candles were lit and the appartements were heady with camellias and violets. Parent had designed the salon walls to vanish on hydraulic cylinders. United, the grand salon, the painting room and music room could hold a thousand guests. What good, though, is a paired staircase to a bachelor? 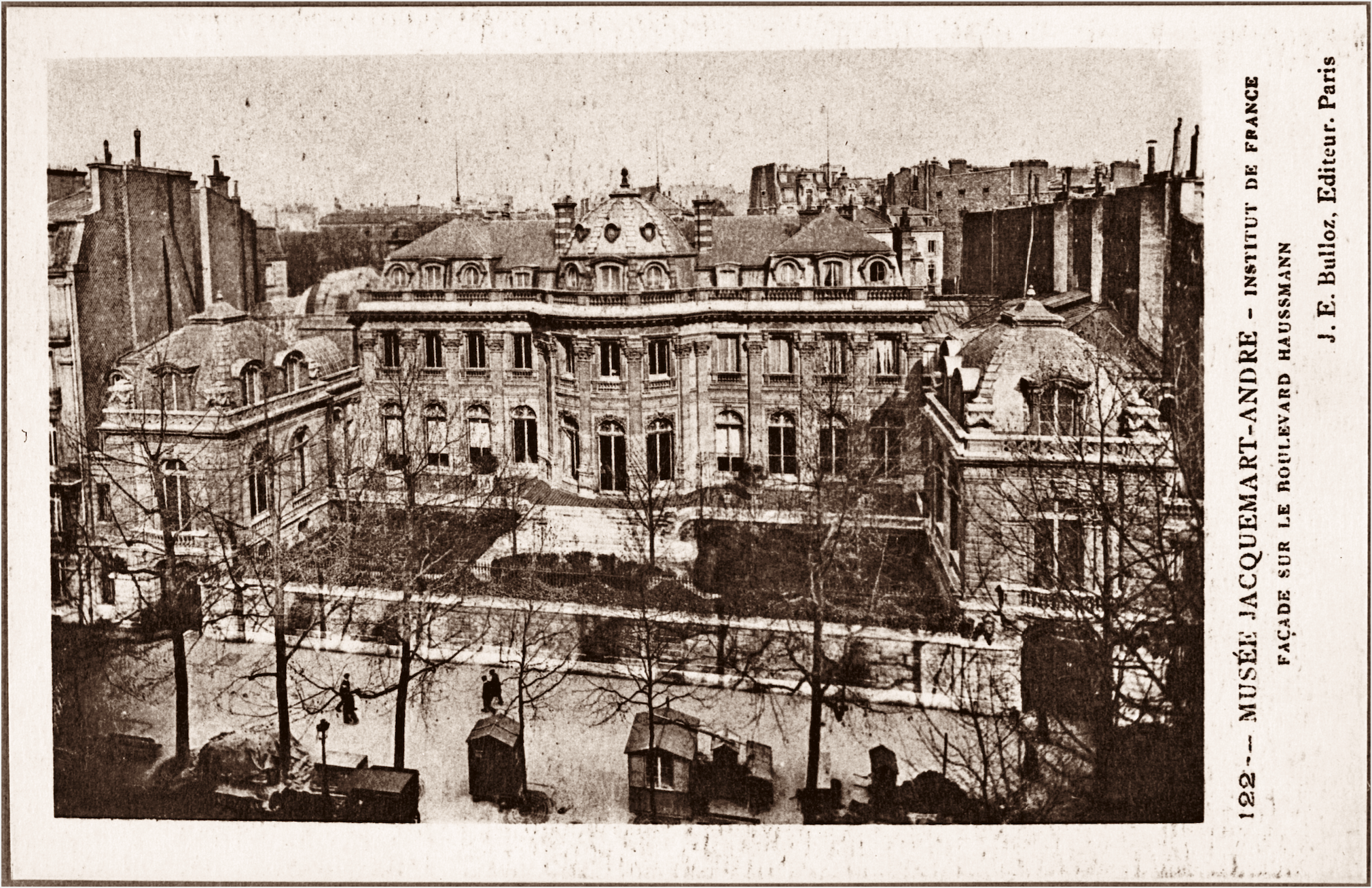 Nélie had painted Édouard’s portrait in 1872, but they did not marry until nine years later. She was 40, he 48. She was a Catholic and a royalist, he a Protestant and Bonapartist. His parents insisted on a contract entirely separating their estates. Nélie and Édouard had no children, but they shared a love of fine things and the grandest of grand tours. 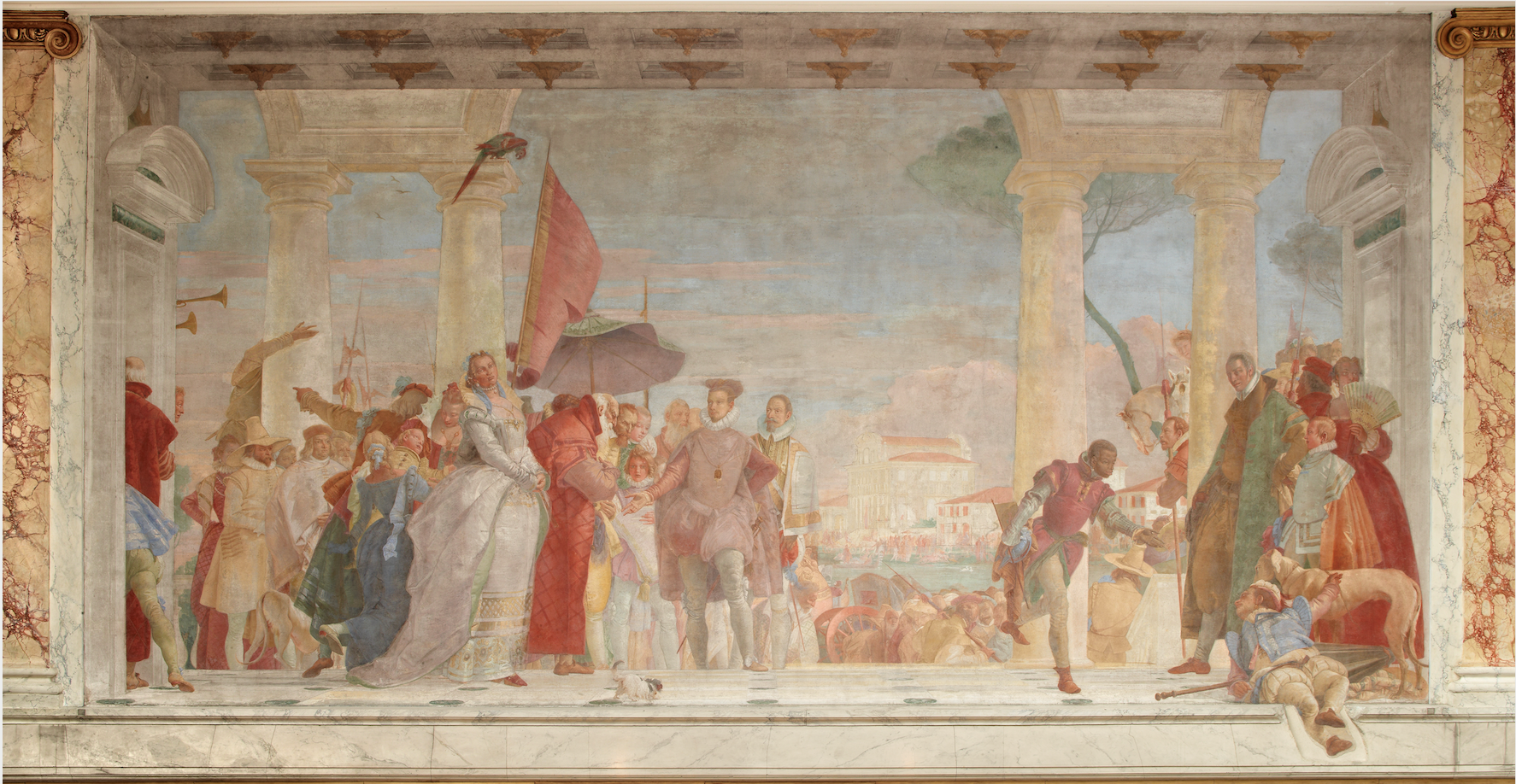 Their shopping inspires a certain awe. Others went to Italy and bought back a Panini, a Guido Reni, a Canaletto. Nélie and Édouard went to Italy and brought back an entire Tiepolo ceiling and fresco from the Villa Contarini and a monumental Venetian fireplace. Among the very first paintings Édouard had bought were Jean Siméon Chardin’s The Attributes of Science and the Arts. Scientific reason is illustrated by a globe, a telescope, a microscope and a set square; the creative arts by a marble bust, a bas-relief, a palette, brushes and rolls of paper. The panels might have stood for Édouard and Nélie themselves: figures and finance; charcoal and oil paint. Together, they plotted over auction catalogues in the library and mapped out voyages to the near East. The smoking room, lined with paper embossed to look like Cordoba leather, was softened by Nélie with 18th-century English portraits by the likes of Thomas Lawrence, Reynolds and Gainsborough. 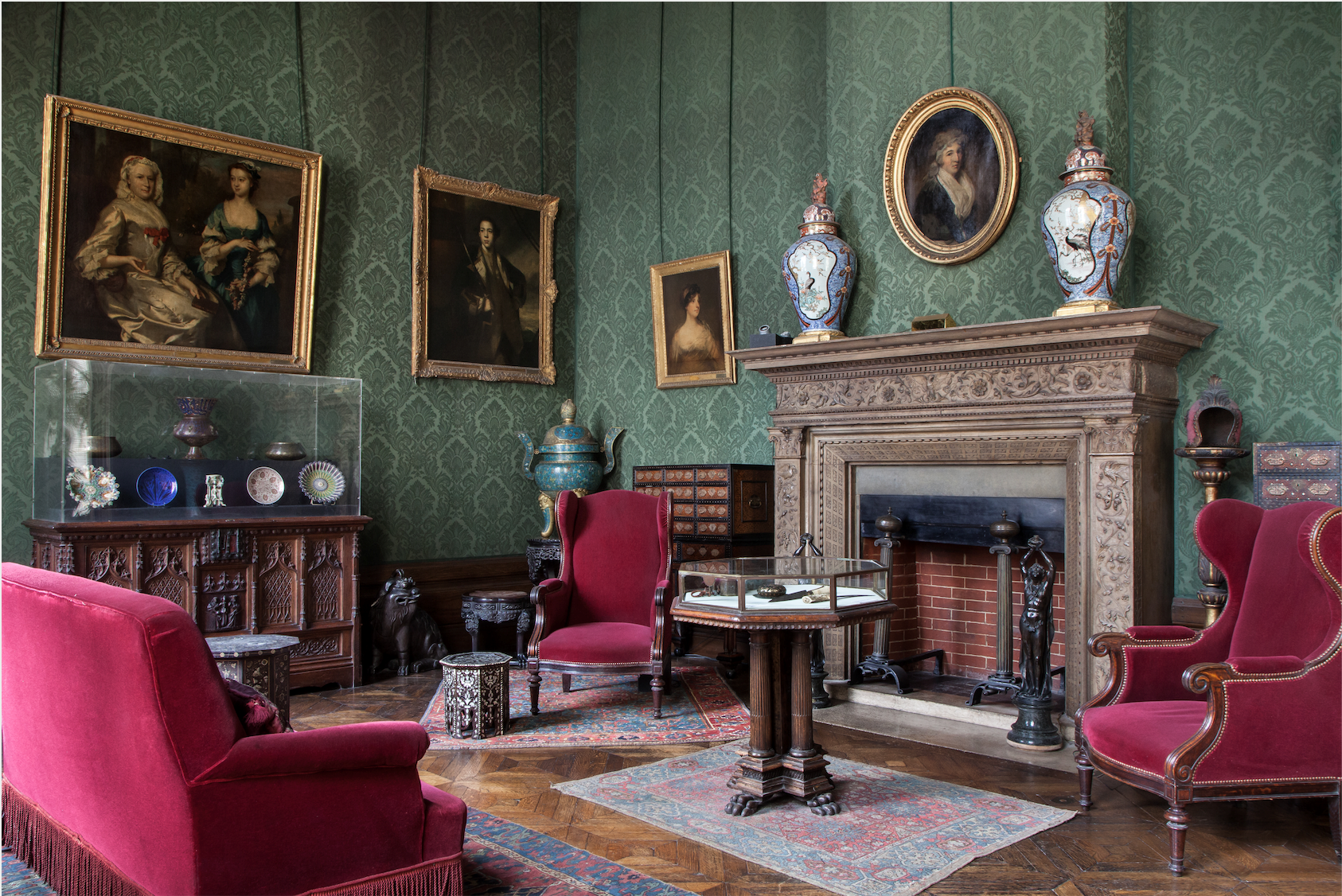 The Italian Museum on the first floor was their shared secret. Guests were granted tours, but not encouraged. The Sculpture Gallery was meant for Nélie’s studio, but soon after marriage she laid down her brushes and took up her chequebook. She bought marble reliefs and glazed Della Robbias, painted cassone and marquetry choir stalls. (The room itself remained empty during Édouard’s lifetime; Nélie installed the sculptures here after his death.) If Nélie was for Florence and the serene elegance of the quattrocento, then Édouard was for Venice, for colour, for Canaletto's San Marco and for Gaurdi’s romantic decay.

When Édouard died in 1894, Nélie became a formidable widow. She fought his family for her husband’s estate – and won. On her death, in 1912, the house and its contents were bequeathed to the Institut de France. The Musée Jacquemart-André opened on 8 December 1913. The next day, 800 visitors filled the salons; the following Sunday more than twice that many came. 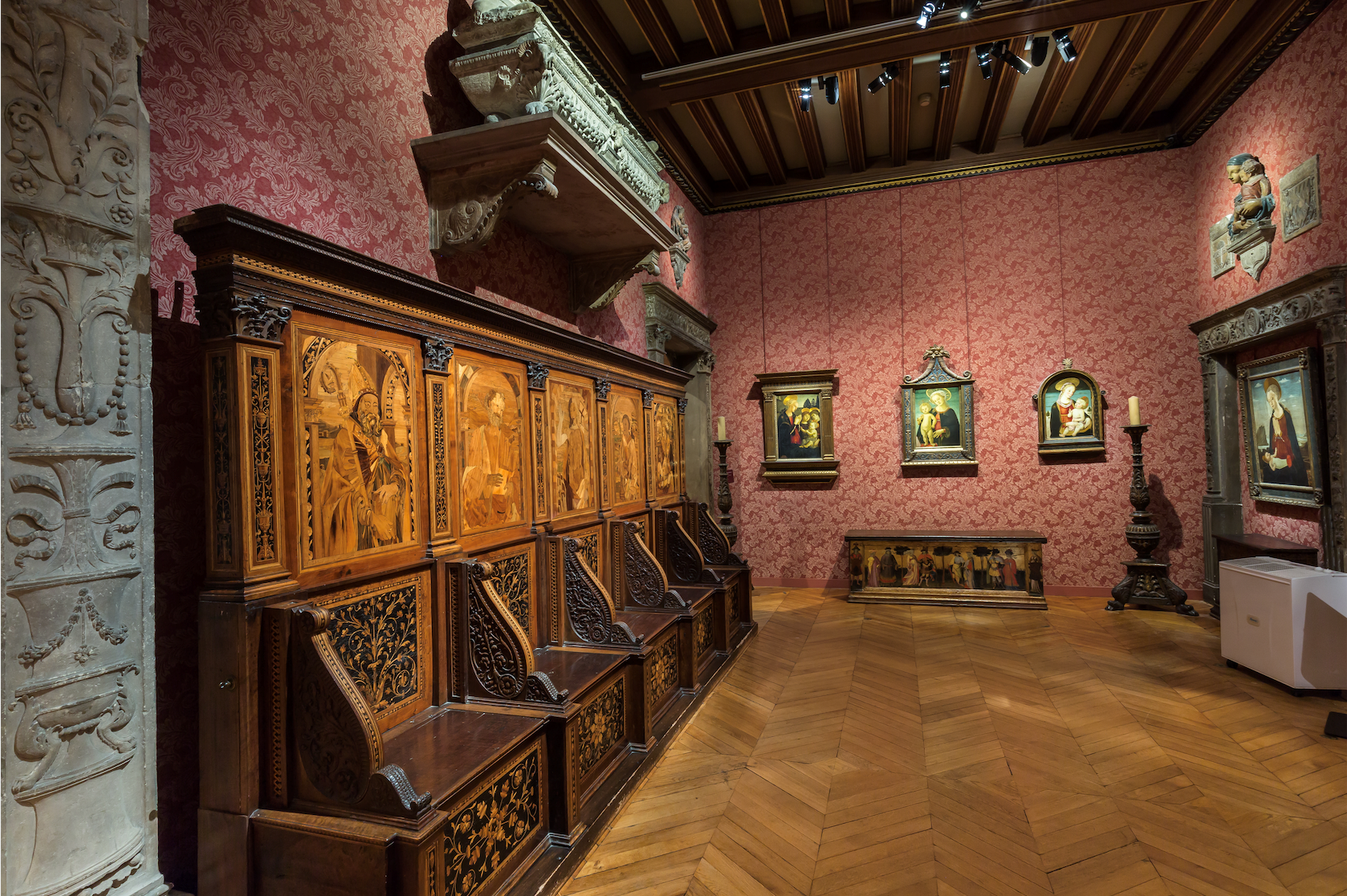 It is the Italian Museum and its treasures that I most remember: Uccello’s Saint George Slaying the Dragon with its landscape of tooth-combed vineyards; Sandro Botticelli’s Flight Into Egypt and its drooping, doleful donkey; Perugino’s Virgin and Child, he in his coral, she bedecked with pearls. From the pomp of Paris in the Third Empire you come into the cool grace of a Tuscan palazzo. The Tissot illusion vanishes. Now, it really ought to be Benozzo Gozzoli designing your costume. In Nélie’s Florentine camera in the 8eme arrondissement, the guiding spirit is no longer Napoleon III, but Cosimo de’ Medici. It is a magical place.
share: