Charleston | House Museums and their Collections 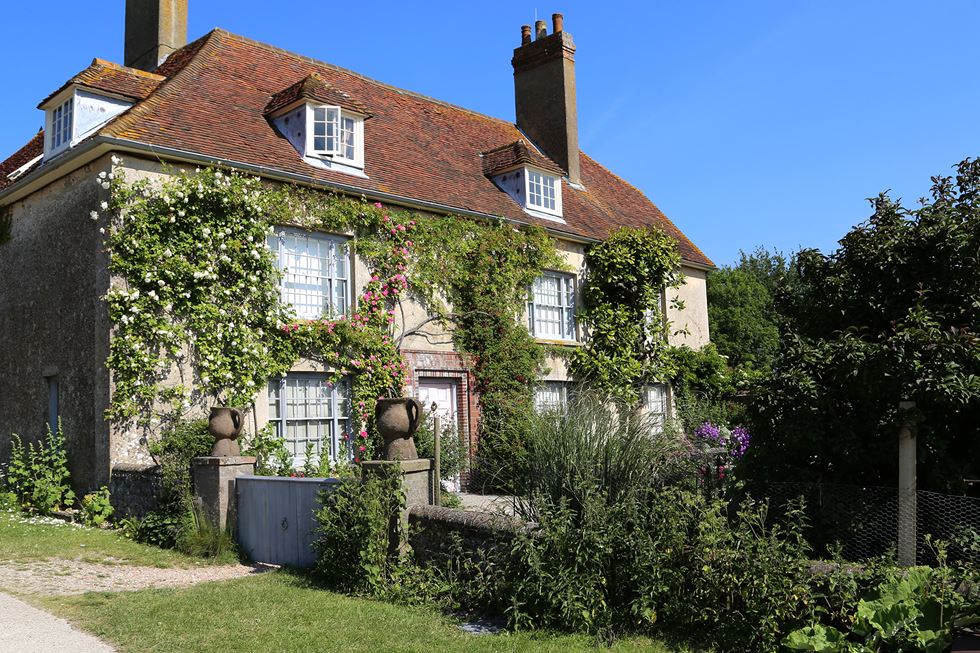 As Vanessa Bell’s son Quentin so aptly described Charleston, ‘It is not so much a house as a phenomenon’. The 16th-century farmhouse, nestled in the Firle Estate, East Sussex, was ‘discovered’ by Virginia Woolf in 1916, when her sister Vanessa was looking for a house to let in the country for herself and Duncan Grant, as well as for her two children and Grant’s lover David Garnett. As conscientious objectors, Grant and Garnett needed to find work on the land to avoid going to prison; they took employment as labourers on a nearby farm.

Charleston provided a convivial meeting place for the artists, writers and thinkers of the Bloomsbury group. Clive Bell (Vanessa’s husband), Duncan Grant, Leonard and Virginia Woolf, Maynard and Lydia Keynes, David Garnett, Roger Fry, Lytton Strachey, Raymond Mortimer, Desmond MacCarthy, T.S. Eliot and E.M. Forster were residents or constant visitors. Here they drew inspiration from one another and from the world that Bell and Grant created. Over the decades, the house continued to attract important visitors, among them André Dunoyer de Segonzac, Matthew Smith, Kenneth Clark, Benjamin Britten, Peter Pears, Frederick Ashton, Anthony Blunt and David Hockney. Again, quoting Quentin Bell, ‘As a habitation of genius and talent, a theatre of intellectual activity for over half a century, it would be remarkable. But Charleston is far more: from the start Duncan Grant, Vanessa Bell and her children and other artists, adorned the house and garden to express both the finest and more importantly the last surviving example of the artists’ decorative work in situ.’ 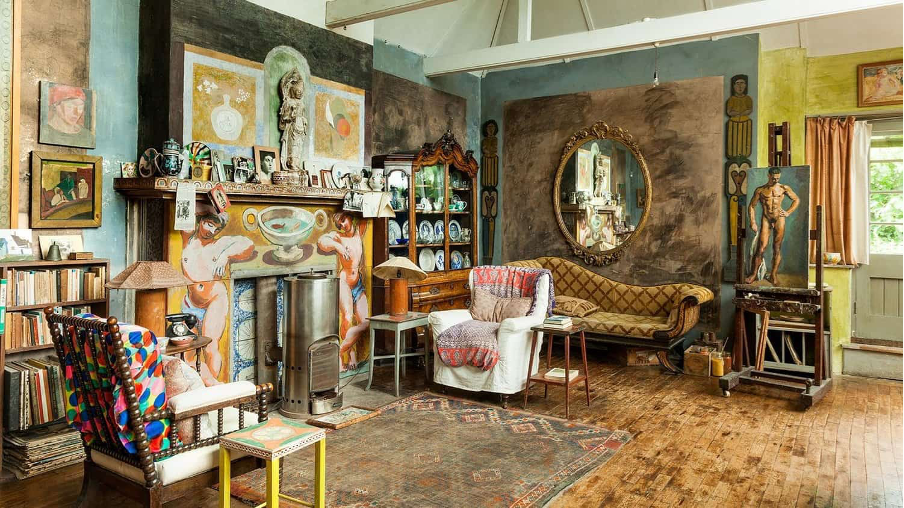 Prior to Bell and Grant’s arrival, Charleston had been a boarding house. There was no electricity, water was drawn from an outside pump and the house was freezing cold during the winter. In order to improve their surroundings, the artists immediately began to paint the walls, the doors, the window surrounds, the fireplace and bedheads. They transformed cheap furniture picked up in Lewes market with their colourful designs. Later, they made mosaics, introduced tilework, and Quentin Bell threw pottery to decorate. They devised lampshades using fabrics brought back from their visits to France and Italy (eventually incorporating their own fabric patterns, designed for Allan Walton Ltd, in various rooms), and designed carpets and seat covers, which were embroidered by Duncan’s mother. Over the course of some six decades, the house itself became a work of art. For these artists, painting on a wall was a direct continuation of painting at their easels; the brush, the sponge, the stencils were all used with the same considered freedom. 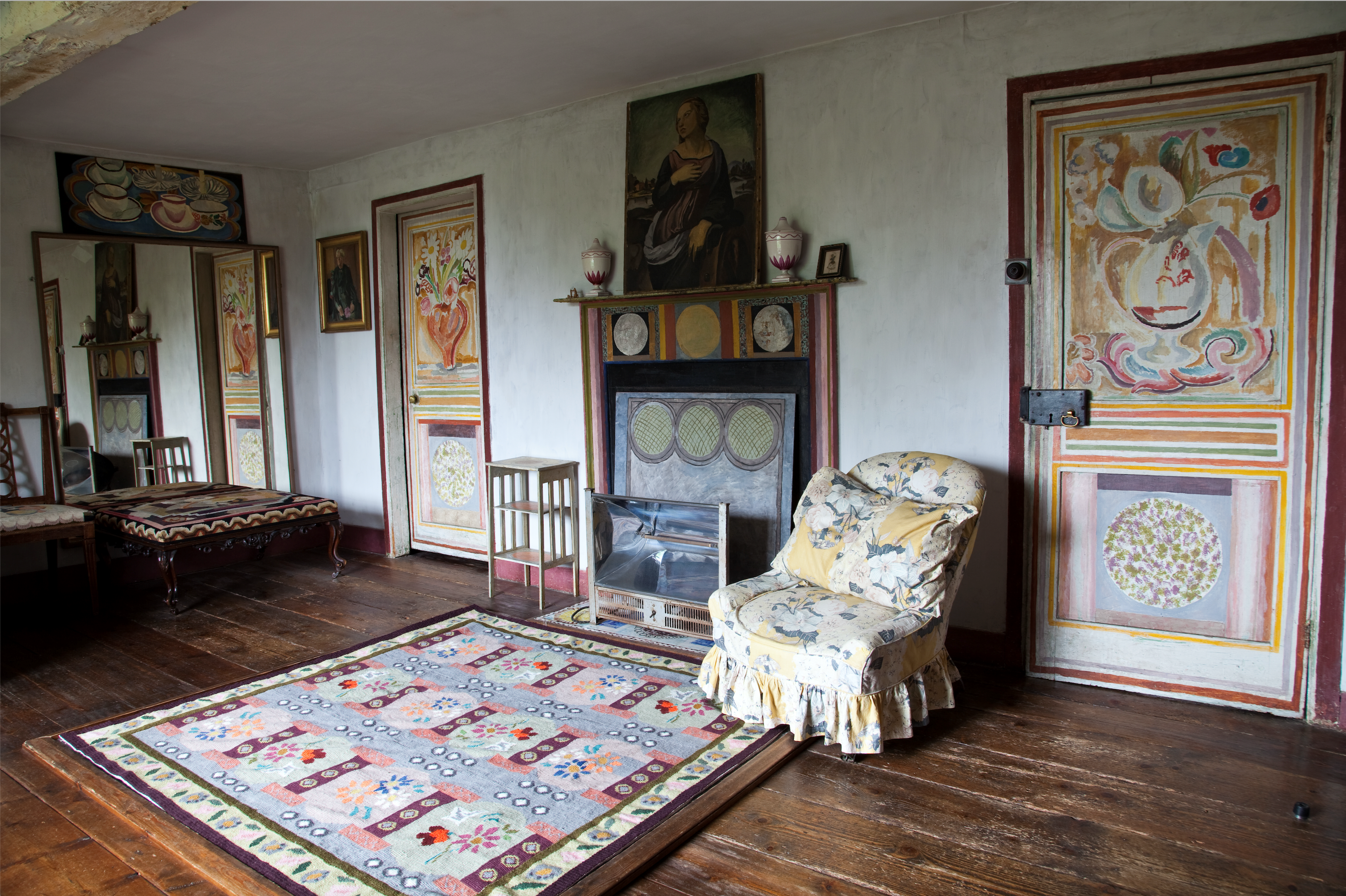 A north-facing studio was built on to the house in 1925, replacing a chicken run, which was based upon designs by Roger Fry; Bell and Grant shared this space until 1939, when Vanessa transformed an attic bedroom into a private studio for herself. Duncan continued to work in the studio, which remains very much as he left it. Also in 1939, Quentin created his pottery next to the folly garden, beyond the studio.

Roger Fry laid out the plan for the walled garden, which evolved from 1920 onwards, with gravel paths, a rectangular lawn and pool. In time, areas became embellished with mosaic pavements, sculptures, and a series of art school plaster cast heads, which Duncan placed along the top of the flint-wall. The grounds, too, were enhanced with a number of sculptural features created by Quentin Bell, including his Levitating Lady from 1973, which reflects in the pond. The garden was always luxurious and colourful; the choice of flowers was influenced by the species the artists incorporated into their own still-life paintings. In 1939 Vanessa moved her bedroom to the ground floor, next to the studio, from where it gave her great joy to look out over the garden. 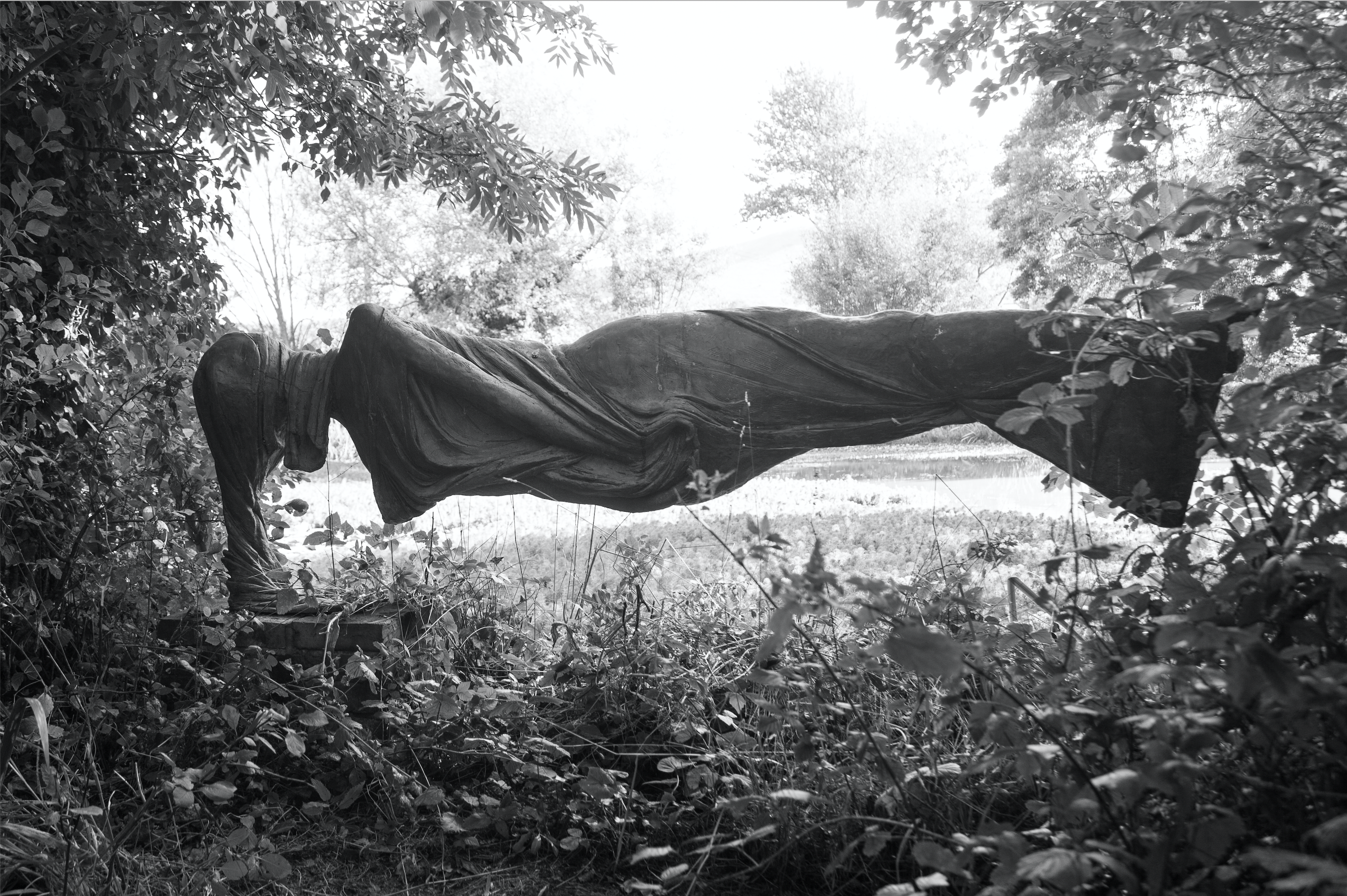 With the outbreak of the Second World War, Charleston became a permanent home for Vanessa Bell, Duncan Grant and Clive Bell (in the interwar years, the artists had used it for holidays). Clive moved his possessions down from London. He established a study downstairs, installing his library in it, and fitted out his bedroom with a wall-to-wall carpet, which brought a new sense of luxury to the house. 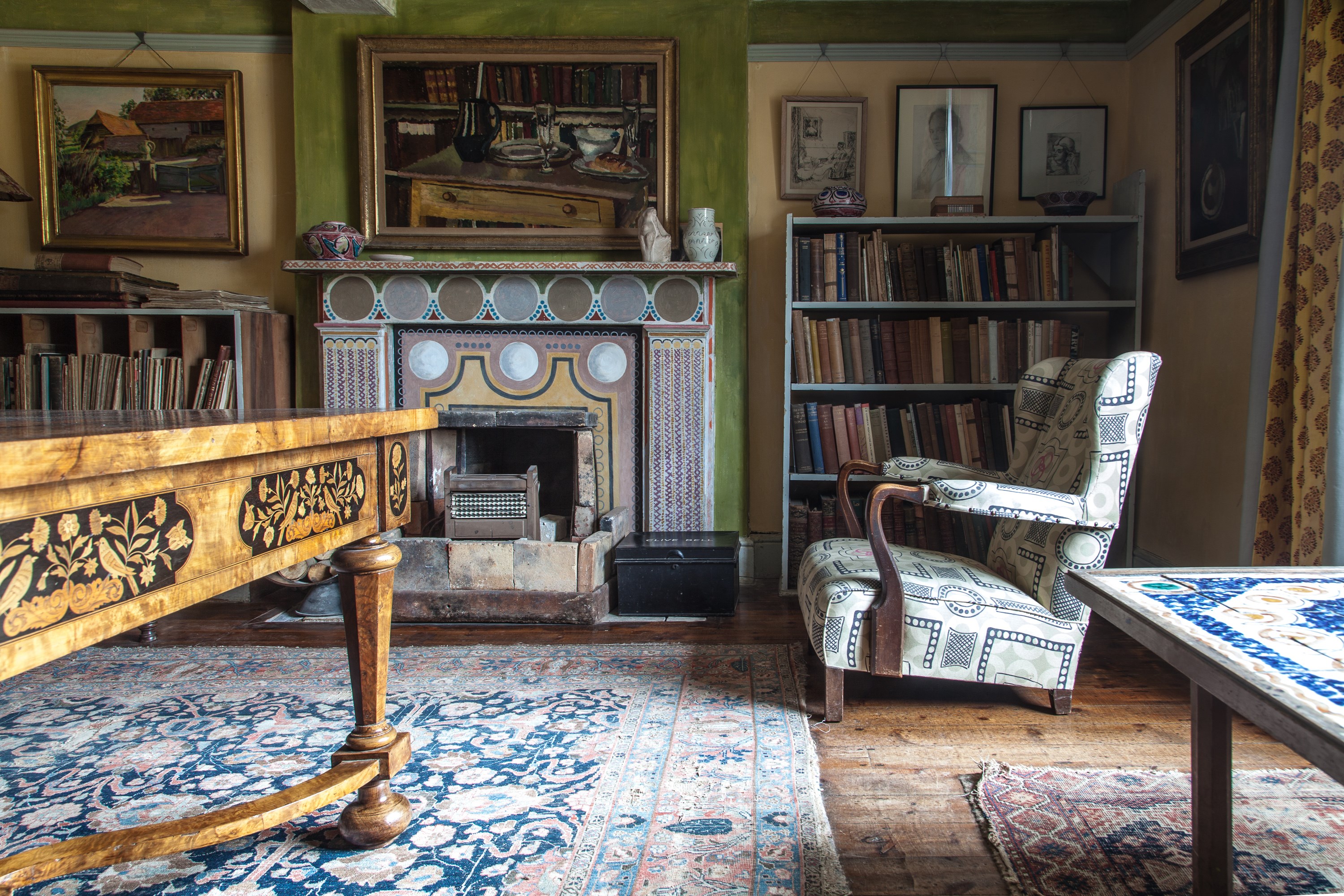 Vanessa Bell died at Charleston in 1961, Clive in 1964. Grant continued living there almost until his death in 1978. In the years that followed, the house was restored by the Charleston Trust, opening to the public in 1986; and in 2018 it was supplemented by a new, purpose-built gallery, which stages exhibitions exploring the lives, art and legacies of the Bloomsbury group. Both achievements relied on the generosity of donors, as the survival of Charleston does now: as an effect of the Covid-19 pandemic, the organisation is facing a huge shortfall, and it has launched an emergency appeal for funds (£160,000) that will enable it to reopen to visitors next spring.

When this crisis is over, we will need the imaginative worlds of places like Charleston more than ever. The Charleston Trust shows the house as it was lived in, without ropes or signs: it is quite something to experience the particular magic of this artists’ home, with its peaceful setting among the chalk hills of the South Downs.

VANESSA BELL (1879–1961), painter and designer, was the eldest daughter of Leslie Stephen. She married Clive Bell in 1907, with whom she had two sons. After an affair with Roger Fry, Vanessa lived with Duncan Grant, with whom she had a daughter, Angelica in 1918. Theirs was an enduring relationship; they worked together in London and Charleston until her death. Trained at the Royal Academy Schools, where she was taught by John Singer Sargent. With Fry, Bell became a co-founder of the Omega Workshops 1913–19. She created woodcuts to illustrate her sister, Virginia Woolf’s books, and book jackets for the Hogarth Press; designer for Allan Walton, Wedgwood, Clarice Cliff and others.

DUNCAN GRANT (1885–1978), painter and designer, was introduced to the circle of friends who lived in Bloomsbury by his cousin, Lytton Strachey. He studied in Paris with Jacques Emile Blanche, and on his return to London became a co-director of the Omega Workshops. He was also a member of the London Artist’s Association and the London Group. Grant was a prolific artist and designer, including for several theatrical sets. Two exhibitions of his work were mounted at the Tate Gallery during his lifetime.
share: