Crane Kalman Gallery was established in Manchester by Andras Kalman in 1949. We moved to our present Knightsbridge location in 1956 and continue to deal in Modern British, European and American paintings and sculpture.

An Exhibition of Paintings, Drawings and watercolours by MARY NEWCOMB

We are delighted to be hosting our own Mary Newcomb exhibition, which will run concurrently with a large retrospective of Mary’s work at Compton Verney Art Gallery in Warwickshire. Their exhibition, entitled Nature’s Canvas, which we have been working closely with them to produce, will run from the 18th May until the 5th September 2021. It will feature over fifty of Mary’s works, sketches and extracts of her writing as well as placing her amongst the work of other artists she admired.

Our London exhibition will include a selection of oils and works on paper to compliment this and will be available to view online and in the gallery.

Nicholas Jones was born in Bristol in 1965. He studied Fine Art at Bristol Polytechnic where his degree show paintings revealed a deep appreciation of Samuel Palmer and a concern for luminosity. For three years he then worked almost exclusively in the medium of stained glass. In 1990 he returned to painting and in the space of twelve months began to discover his own artistic identity, working with a sudden confidence, intensity and independence. It was at this time that he first met Andras Kalman and his paintings have featured frequently in the Crane Kalman Gallery ever since. Crane Kalman have mounted eight solo exhibitions of his work since 2000.

Alan Lowndes - A Retrospective Celebrating the Centenary of the Artist's Birth

Lowndes grew up in Stockport and after leaving school at the age of fourteen was apprenticed to a decorator.  He was a self-taught artist.  His first one-man show was held at Crane Kalman (then in Manchester) in 1950 and the gallery has regularly exhibited his work ever since.  Public collections that hold his work include the Walker Art Gallery, Liverpool, the City Art Gallery, Manchester and Plymouth Art Gallery.

Like Lowry, Lowndes was a painter of the working classes.  They had similarly simplistic styles of painting and like Lowry, Lowndes’s work presents a nostalgic vision of life in the urban north.  Many of Lowndes’s contemporaries did not appreciate his art.  His father famously offered to pay his bus fare to the wealthy Alderley Edge in order that he might paint the scenic spot referred to as Artists’ Lane rather than ordinary people going about their everyday lives.  Willis Hall wrote: ‘Lowndes; artistically at least, has become more of a sociologist than a socialist.  He describes, vividly and with great insight; he observes the change, somewhat passively; but he does not prescribe the cure’.

Though manly a painter of scenes of northern working-class life he also travelled to and spent time in St Ives, befriending many of the St Ives School Artists including Sir Terry Frost. His work was also collected by the actor Charles Laughton who once said of his acquisitions, “I have found a Modigliani of the streets.”

A major retrospective of his work was held at Stockport Art Gallery in 2010 and later moving to Crane Kalman. 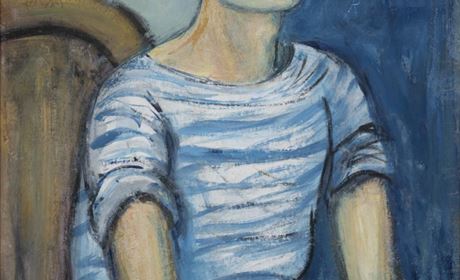 Jethro Buck is a painter with a special interest in Indian miniature painting.  He applies traditional techniques to explore and celebrate the natural world, mainly using hand ground natural pigments.  Buck holds a Bachelors degree in Fine Art from Falmouth College of Arts (2005-2008) and a Masters degree in Traditional Arts from the Princes Foundation School of Traditional Arts (2012-2014). He was awarded the Farjam scholarship to study there and in 2014 received the Ciclitira prize for outstanding work presented by HRH Prince Charles.  In addition to several well received sell out solo exhibitions, Buck’s work has been acquired by numerous private collections worldwide and included in various publications.

In 2012 Buck received a grant from INTACH - Indian National Trust for Art and Cultural Heritage.  He used this to study Indian miniature painting under the tutelage of master painter Ajay Sharma.

He is now based at his studio in Cambridge. He also runs workshops and has been a visiting lecturer at various schools and institutions."My work is essentially an exploration of Nature and a celebration of life and beauty.  I’m far more comfortable painting this sentiment than I am saying it.  I paint in order to explore, to seek truth and find joy in the process."