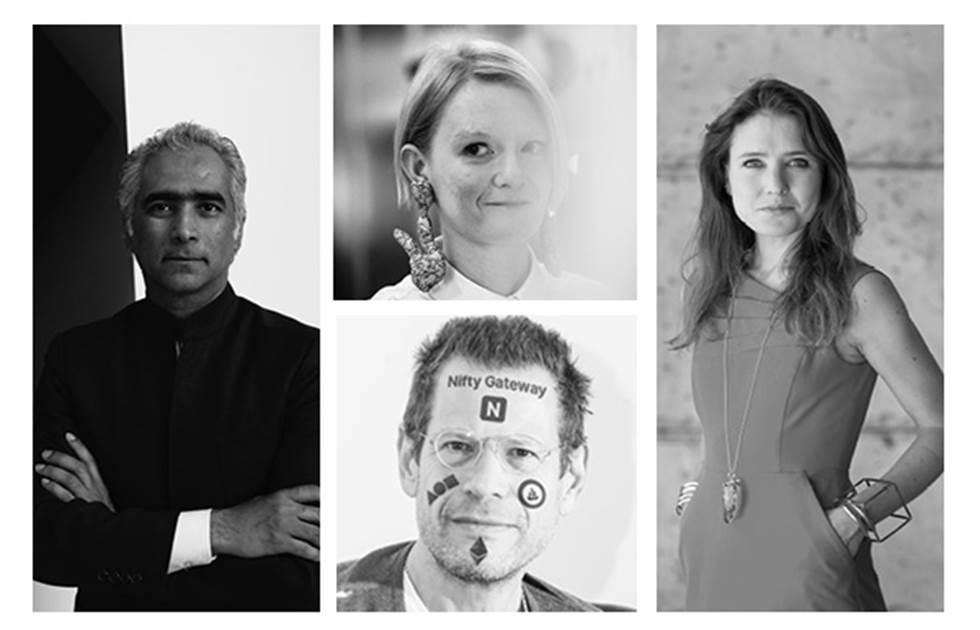 The cancellation of analogue art fairs and exhibitions due to pandemic-related restrictions over the past year has hastened the ascent of digital art, most notably the meteoric rise of crypto-art and NFTs (non-fungible tokens) over the past six months. But now this digitally native art is increasingly entering the physical realm, with bricks-and-mortar spaces specialising in NFTs and galleries working out how to show virtual creations, IRL. In this talk, curators, creators and gallerists will give their views on how the virtual and physical art worlds are (and, perhaps, are not) aligning.

Anna Brady is the art market editor at The Art Newspaper, where she has worked since 2017, and has reported on the art, antiques and interiors industries for over a decade. She was previously features editor at Harper’s Bazaar Art and Interiors magazines in Dubai, and before that wrote for the Antiques Trade Gazette. She has also written for Apollo, Wallpaper, the Evening Standard, the Independent, BOAT International, House & Garden and World of Interiors among others.

Mark Dale is the Founder and Creative Director of W1 Curates. With a clear vision to make art more accessible, W1 Curates is taking art out of the traditional gallery space and displaying it in the heart of London for all to enjoy. More art, less Ads.

Marie Foulston is an award winning curator and creative director of playful exhibitions, installations and experiences. Most recently she was Curator of Videogames at the V&A where she curated the headline exhibition ‘Videogames’ and founded ‘Parallel Worlds’, an annual conference on the design and culture of games. In 2020 she was director of experimental games festival ‘Now Play This’ at Somerset House.  Across her career she has collaborated with a host of international organisations and brands including the Smithsonian, the Game Developers Conference, London Film Festival, Penguin Random House, Channel 4, V&A Dundee, ACMI, the Art Gallery of Ontario and MoPOP.

Kenny Schachter has been curating contemporary art exhibits in museums and galleries and teaching (art history and economics) for more than thirty years; presently in the graduate department of the University of Zurich (appointed to advisory board January 2021) professorships at the School of Visual Arts (NY) and New York University. He has lectured internationally, been the recipient of a Rockefeller supported grant in Mexico, and contributed to books on Paul Thek, Zaha Hadid, Vito Acconci and Sigmar Polke/Gerhard Richter. Schachter has a regular column on Artnet.com in addition to writing widely for various international publications including most recently New York Magazine and The Times Magazine (UK). He had a retrospective of his art at Joel Mesler’s Rental Gallery in New York in the summer of 2018, curated an exhibit at Simon Lee Gallery in London, fall 2018 and a one person show at Kantor Gallery, LA, February 2019. Next up: an NFT group exhibit at Nagel-Draxler Gallery in Cologne, a two-person show with Eva Beresin at Galerie Charim in Vienna (both in April 2021) and another one person show at Blum & Poe Tokyo (November 2021). Schachter is presently the subject of a documentary being produced and directed by Chris Smith and has been profiled in The New York Times Magazine (cover story, September, 1996), and London's Observer, Independent and Telegraph. He is currently based in New York.

Sundaram Tagore is a Calcutta-born Oxford-educated art historian, gallerist, and an award-winning filmmaker. A descendant of the influential poet and Nobel Prize-winner Rabindranath Tagore, he promotes East-West dialogue through his contributions to numerous exhibitions as well as his three art galleries and their multicultural and multidisciplinary events.Before opening his own gallery, Tagore was a director at Pace Wildenstein Gallery in New York. He has also advised and worked with many international organizations including the National Gallery of Modern Art, New Delhi; the Metropolitan Museum of Art and the Museum of Modern Art, New York; and the United Nations. He is a trustee of the Isamu Noguchi Museum in New York. A candidate for a Doctorate of Philosophy from the University of Oxford, Tagore also writes for numerous art publications. His feature-length articles have appeared in ARTnews, Art in America, and Art India. He also lectures frequently on art, including at the Tällberg Forum in Sweden, Sotheby’s, the Hong Kong Foreign Correspondents Club and Singapore Management University. In addition, he is on the board of trustees for the Isamu Noguchi Museum and Asian Cultural Council New York. Sundaram is also a filmmaker, with his second film; Louis Kahn’s Tiger City currently being shown on Amazon Prime and PBS.